When do we use Armoured Cables?

What is the difference between unarmoured and armoured cables? 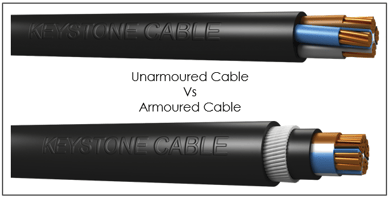 As the name implies, an armoured cable has added protective armour that helps protect the cable core. This is important in places where there could be accidental damage to the cable due to mechanical stress or impact. To put it in context, typically armoured cables would be used when you require the cable to be buried directly underground, for outdoor installation or in tunnels. There may be instances where the ground is opened up again, and in the process, a spade or mechanical excavator may hit the buried cable by accident. The armour in this case would help protect the cable conductor core from being exposed easily and prevent electric shocks and interruptions in power delivery.

For standard power cables, you may come across aluminium wire armour (AWA) or steel wire armour (SWA). Steel is naturally a stronger material, but you will notice that for single-core cables, it is ALWAYS paired with AWA and never SWA. This is because aluminium is non-magnetic.

What is AWA vs SWA for armoured cables?

If a single-core cable is paired with steel wire armour, there will be a magnetic field induced when current flows through - the whole cable becomes a large magnet. The higher the current, the larger the field. The magnetic field will induce an electric current (eddy current) in the steel, which would cause overheating and massive derating of the cable. Aluminium, due to its non-magnetic nature, would not cause this issue.

However, once we move past single-core into two or more cores, it is safe to revert to galvanized steel wire armour because magnetic fields produced in such multi-core cables will have a cancelling out effect by the other cores’ fields thereby preventing the magnetic flux.

This would be a typical armoured cable construction at Keystone:

Conductor: Class 2 stranded plain annealed copper
Insulation: cross-linked polyethylene (XLPE) is recommended over polyvinyl chloride (PVC) to provide a higher maximum operating temperature, better water resistance and stronger dielectric properties
Bedding: a protective layer between the insulation and the armour.
Armour: steel or aluminium armour to provide the mechanical protection
Sheath: PVC or LSZH (Low Smoke Zero Halogen) outer sheath that holds the cable together. LSZH would be recommended for public areas or in tunnels. At Keystone we would also include UV stabilizer and anti-termite additives in our cable sheath material.

Why Insulation Resistance (IR) Test Is Important For Your Cables