In our previous Keystone Academy blog ‘What is the Difference Between FRT and FR Cable?’, we shared that Fire Resistant (FR) cables are a fire safety product, which means they not only reduce the spread of fire, but will also maintain circuit integrity in the presence of fire. 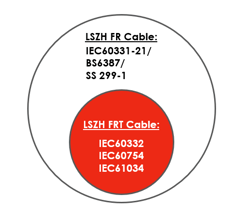 This is critical so that life-saving electrical installations such as fire alarms, smoke detectors, PA systems, and emergency lighting, are able to perform their functions in the event of a fire.
In addition to complying with LSZH flame retardant (FRT) tests (IEC 60332, IEC 60754, and IEC 61034), LSZH FR cables are also tested to IEC 60331-21, BS 6387 or SS 299 to ensure that the fire-resistant cables maintain circuit integrity under fire conditions. In this article, we introduce the differences among the 3 common LSZH FR test standards.

IEC 60331-21 is the basic international testing standard for fire resistant cables. There is one set of requirements to test for cable’s circuit integrity under fire:

This test standard is suitable for low voltage power cables and control cables with a rated voltage up to and including 0.6/1kV. During the test, the cable is connected to a transformer output with a 2A fuse in each phase. The test is deemed successful if there are no fuse fails and the test light is not extinguished.

Singapore Standard SS 299 specifies tests for fire resistant cables. This standard was updated in September 2021, and it is a modified adoption of British Standard BS 6387:2013, 'Test method for resistance to fire of cables required to maintain circuit integrity under fire conditions'.

British Standards BS 6387 is the most commonly recognised FR cable test standard.
Based on the latest standards update BS6387:2013, an FR cable is considered compliant only if it passes the BS 6387 Cat. CWZ requirement:

Keystone Cable’s fire resistant range complies with all of the above international standards.

What is the Difference Between FRT and FR Cable?