What is the Difference Between FRT and FR Cable?

Flame and Fire can be used interchangeably, but the confusion occurs between Retardant and Resistant. Knowing what these cable properties mean can help ensure you are getting the right cable for your application.

LSZH FRT cable is a cable that does not promote the spread of fire. But the cable will not maintain circuit integrity in the presence of fire.

The international standards on flame propagation are IEC 60332-1-2 for a single insulated wire or cable, or IEC 60332-3 for vertically-mounted bunched wires or cables under fire conditions.

LSZH FRT cable is an important cable to be used in enclosed areas with high foot traffic, such as underground passenger systems, airports, schools, hotels, hospitals, and high-rise buildings.

LSZH FR cable is a fire safety product, which means it not only reduces the spread of fire, it will maintain circuit integrity in the presence of fire.

FR cable has a layer of mica tape around individual copper conductor. Mica is a natural inorganic mineral that is incombustible, has high dielectric strength and excellent heat resistance. Hence during a fire, the mica acts as a fire barrier to the conductor and continues to maintain circuit integrity. In addition to LSZH FRT tests (IEC 60332, IEC 60754, and IEC 61034), LSZH FR cable is also tested to IEC 60331, BS 6387 or SS 299-1. These tests cover the cable’s resistance to fire, resistance to fire with water and resistance to fire with mechanical shock.

LSZH FR cable is an important cable to be used when you require critical electrical installations to perform during a fire evacuation: fire alarm systems, voice alarm systems, and emergency lighting systems.

At Keystone, we ensure that our LSZH FR cables fulfil BS 6387 Cat. CWZ, which ensures highest performance and safety levels for such cables. 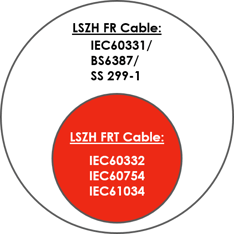 To understand the properties of LSZH, we compare it to the most commonly used cable material, PVC, or polyvinyl chloride.

In the event of a fire where PVC burns, black carbon smoke and hydrogen chloride gas (HCl) are released. Black smoke impedes general vision. And when gaseous hydrogen chloride comes in contact with moisture, such as a person’s eyes, mouth, throat and nose, it dissolves to form hydrochloric acid, causing extreme irritation and choking which hinders escape.

LSZH, because of inorganic additives such as aluminium hydroxide or magnesium hydroxide, releases gaseous water when burned, which helps envelop the flame and exclude oxygen from the fire. In this chemical reaction, the decomposed products are non-toxic and the mineral phases MgO and Al2O3 are alkaline, thereby reducing the likelihood of acidic gas irritations.

Conductor Resistance: A basic but important test for your cables